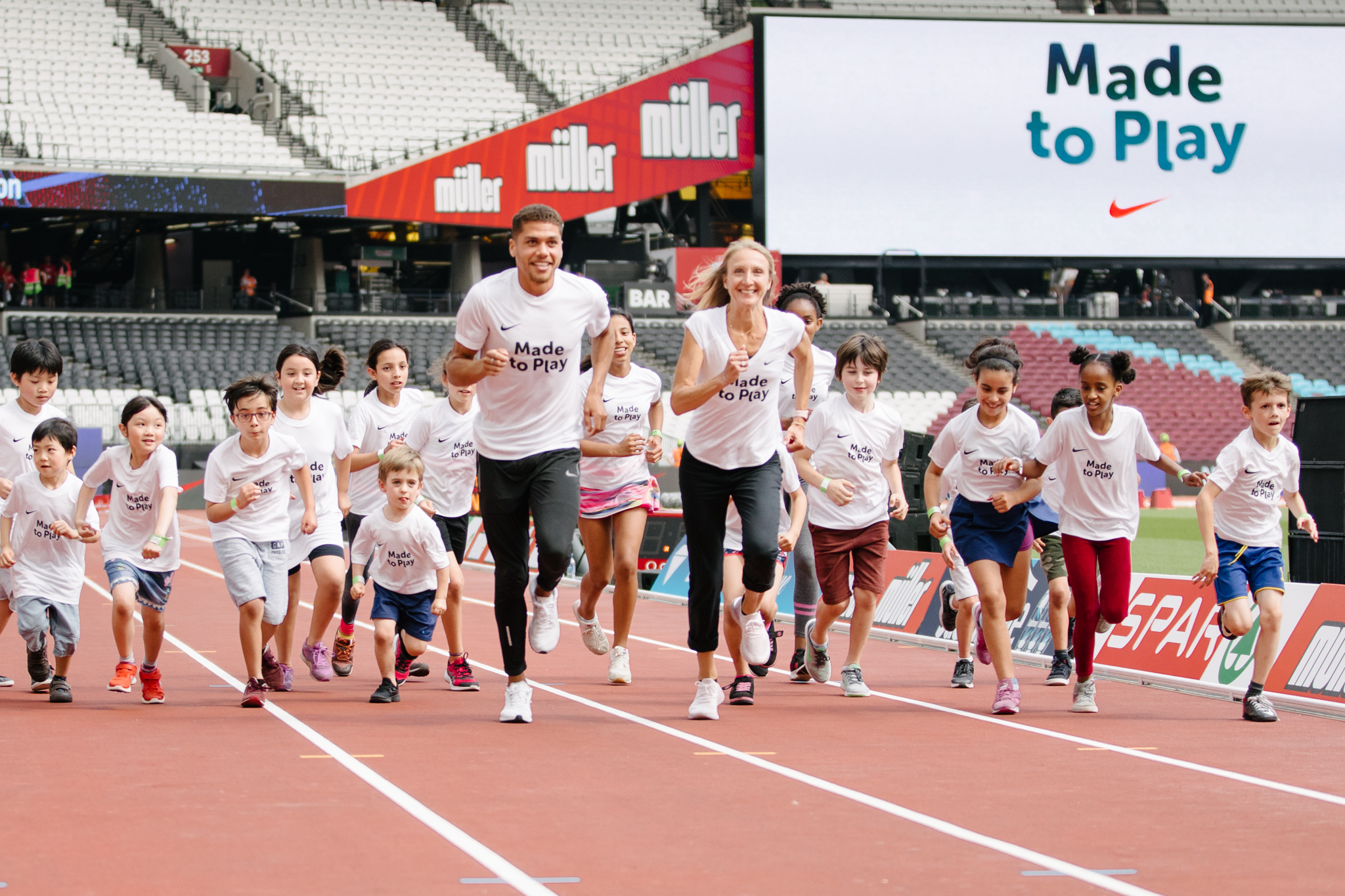 More than 2,500 schoolkids, teachers and parents from across London and beyond were at the Müller Anniversary Games this weekend. The kids were celebrating the progress they’ve made in getting active through play and sport during the past school year, and soaking up inspiration from the world’s leading athletes.

For 21 kids from St Joseph’s School in Highgate (London), it was an extra-special experience, as they took to the track at the London Stadium with the legendary British World, European and Commonwealth champion Paula Radcliffe MBE and the middle distance runner Elliot Giles. Paula and Elliot turned their hand to coaching on the day, running the kids through warm-ups and fun activities.

The kids were invited to attend the Müller Anniversary Games by British Athletics in partnership with Nike and Discovery Education, whose Active Kids Do Better programme provides resources to help teachers increase movement and play before, during and after school. Launched in February 2018, the Active Kids Do Better programme provides free teacher resources to get kids active before, during and after schools. They have been downloaded by nearly 1,000 schools across the UK. Of these, over 360 schools have also signed up to a pledge to continue to create a more active culture in their primary schools. To-date the programme has encouraged over 12,000 pupils to get active with support from over 400 active teachers.

Regular physical activity has been linked to improved physical health, improved mental wellbeing and academic attainment. However, today’s children are the least active generation in history. Fewer than one in four young children in the UK get the recommended amount of exercise, which means that millions of kids are missing out on the benefit of sport and play.

“It’s great to be back at the London Stadium for the Müller Anniversary Games and to see so much excitement from the 2,500 school kids, teachers and parents who are here to celebrate getting active with Nike and Discovery Education. Kids are made to play and it’s fantastic to see how by being active and having fun they are benefiting, both physically and mentally. I’m proud to be working with Nike to help inspire more kids to get active through the power of play and truly believe that this helps any child achieve their potential.”

“All of the children at the Müller Anniversary Games have had an amazing experience. And it was even more special for a group of children from one of our classes, who got to head out on the track to be coached by Paula Radcliffe and Elliot Giles. We are here to celebrate the fantastic achievement of kids who have been involved with Nike and Discovery Education’s Active Kids Do Better programme. As well as increased levels of physical activity, we’re seeing improved levels of attainment, concentration and social inclusion, which is fantastic. We hope today’s event will give the children even more inspiration to keep up the great work and get active.”

Active Kids Do Better is available to UK primary schools. Visit: activekidsdobetter.co.uk to access free resources and make the pledge.

From Around The World: Back to School